An animated video was being played for about 3 minutes while the guys went to get changed to their next outfits. It featured Shane summoning Nicky, Kian and Mark from their respective locations. Nicky was watching a soccer match in a stadium, Kian was scuba diving and had to travel via surfboard, Mark ejected from his fighter jet and flew to safety via parachute. Once they reached the base, Shane turned on the multi-TV panel that showcased the many countries they had o go to. They did yoga, spa treatment and manicure sessions before they boarded a private jet.

When they re-emerged on stage in red and black suits, they started singing to "Uptown Girl".

Soon after that they sang to their 2nd Number 1 UK Single "If I Let You Go". Nicky did the intro to the song, and Kian removed his jacket for this segment.

Now this segment was a bit kelong in the eyes of some fans. Normally for the "Better Man" segment, Westlife woul call out about 4 girls on stage to sing along with them. They actually called out 2 Irish girls, and this was pre-planned. The girls' names are Nikki (probably short for Nicole) and Eva. An Irish guy suddenly emerged from behind and went down on one knee, proposing to Nikki!! After the couple kissed and Westlife celebrated, the guy whose name is David joked that "everybody is invited to their engagement party". Personally I felt that this surprise was way too similar to a similar stint that took place during Boyzone's concert at the Indoor Stadium last year.

Anyway the quartet performed "Better Man" with the newly engaged couple seated in the middle. The song was the second new single released earlier this year, written and composed by Steve Mac and Ed Sheeran. After singing, they got a group photo with David and Nikki, then made their way to backstage to change their outfits.
Posted by TaNaT DaMaN at 10:00 PM No comments: 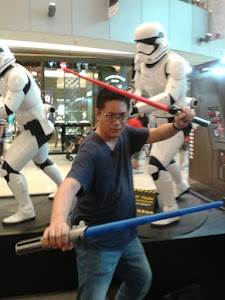 There's been an awakening, have you felt it?

TaNaT DaMaN
I lead a life less than ordinary, and I am always full of surprises. Not only am I a huge fan of Star Wars, I also like all things Marvel (X-Men, Spider-Man, Fantastic Four, etc), WWE and Mediacorp artistes too... top fave artistes include Joanne, Rebecca, Rui En, Cheryl, Jayley, Sora, Paige, too many to name! And one last thing, my name is pronounced as "tah-NUT" NOT "tah-net" or "teh-net" or "teh-nut"!!!